History tells us that the town dates back to the Paleolithic era.

Since then, Phoenicians, Carthaginians and Romans called it Astapa (which means ‘people who live near the sea’).

Subsistence has always been linked to trade in agriculture and fishing.

During the Muslim settlements, there were three names given to the town such as Alextebbuna, Asttebbuna and Istebbbuna.

Back in the era of the Caliphate of Cordoba, a Relevant figure used to visit the region, his name was Benestepar, he lived in a dwelling located on the shores of Sierra Bermeja, (the mountain that embraces and shelters the village), where he used to found peace and rest: well, this man is known as the first tourist in the area.

Already, under Henry IV, due to the refusal of Muslims to pay taxes in arrears, led the King on spring of 1456 to conquer the town of Alextebbuna that went to the hands of Christians.

From this moment, he ordered the construction of a fortress to defend the coast. Due to its proximity to the Strait and northern Africa, it was considered a strategic military point; since then, the present Estepona was founded. Christians who have been occupying these lands bequeathing each a piece of their history to us.

It is the king who gives the rule of the town to the Marquis of Villena and his friends.

Our journey in story takes us now through the old town and it various state houses, among which we highlight the majestic Castle of San Luis with its various Beacon Towers (whose construction was ordered by the Catholic Kings in the sixteenth century once they conquered kingdom of Granada), to revitalize the new Estepona and defend it well from Muslim invaders and possible pirates.

In 1502, Fernando de Zafra by royal decree was made responsible for the repopulation of the city after forty years of abandonment and of the rebuilding of the walls. This fact was very important because until the eighteenth century it unfolded and formed the current population, dependent from Marbella. 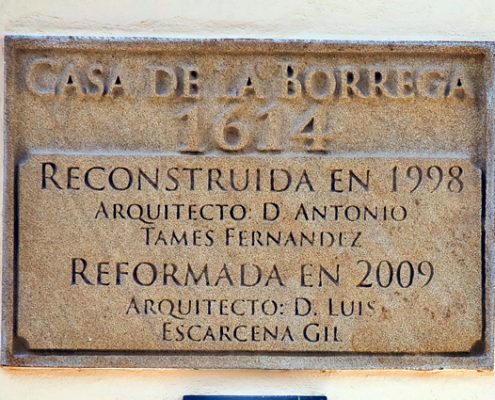 Finally, with over 600 inhabitants in Estepona, King Philip V granted it total and absolute independence as recorded verbatim in the Villazgo Letter signed by the King in Seville on April 21st, 1729 which is preserved in the municipal archives of Estepona.

It is during this period where the best and most successful developments in the economy of the town of Estepona took place and where historic buildings were commissioned, such as the house of the Marquis of Mondejar and as it’s the case with our building ‘LA CASA DE LA BORREGA’ dating from 1614.

Focusing on history, LA CASA DE LA BORREGA, stands out due to its unique style and an idyllic environment. Always inhabited by people relevant to the history of our town, it became a landmark building full of charm and listed as a tourist attraction.

If you’re interested, please see a small gallery of photos of our most current story, which reflects the recent changes undergone by Estepona from the last century until today, see how our customs and agricultural roots still persist to date.